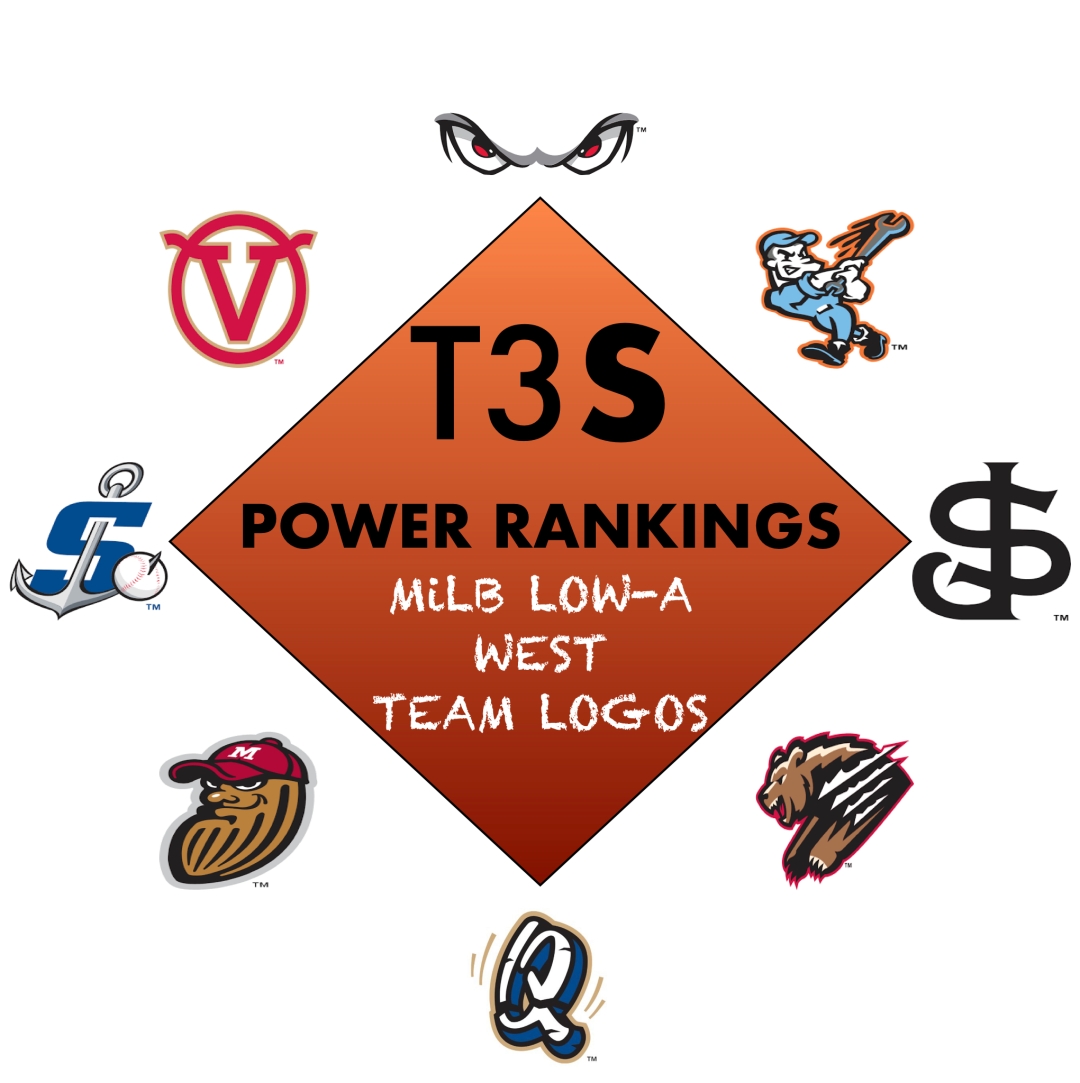 We’re into Week 3-Volume 3 of our Team Logo Power Rankings as we wrap up the Low-A circuit with the Low-A West League. The smallest league of the 3 in Low-A (8 Teams), the West had some pretty interesting logos and a lot to talk about.

This time around, we don’t want to drag you through all the scoring and category nonsense again. If you’re a first-time reader of either the blog or the Logo Power Rankings specifically, (thank you for checking us out!), but check out Volume 1 and Volume 2 now before reading on. It’ll definitely help you get a sense of how we do things!

This week, we had all 4 Three Spot guys (finally) together for our rankings. We also had our 2nd guest on the blog, our buddy Mike (@athe5ivefootgiant), to help us out!

Without further ado, let’s get right into it!

UNIQUENESS: THERE ARE OTHER LETTER-THEMED LOGOS IN THIS LEAGUE, SO IT CAN’T GET TOO MUCH CREDIT. IT’S SIMILAR TO ITS SAN Francisco AFFILIATE JUST WITH A SLIGHTLY DIFFERENT FONT. THE OLD SCHOOL LETTERING HELPS IT A BIT, BUT WE’VE SEEN BETTER.

intimidation FACTOR: WE CAN READ. LETTERS DON’T SCARE US. HOWEVER, THE ACTUAL TEAM IS WINNING GAMES AT A .611 CLIP AND HAVE WON 6 LEAGUE CHAMPIONSHIPS AS THE GIANTS. THAT’S MORE INTIMIDATING THAN THE LOGO ITSELF.

GEOGRAPHIC INCLUSION: Oh brother…I mean it’s got an “S” and a “J”. those letters are in “San Jose”. EASY TO TELL THEIR AFFILIATE, BUT… moving on.

COLOR SCHEME: THE BLACK ON BLACK IS SLEEK, BUT IT JUST LEAVES SOMETHING TO BE DESIRED. WE NEED MORE OF A… SPLASH.

UNIQUENESS: THIS IS RIDICULOUS. WHERE IS THE SHOWMANSHIP? THIS LOOKS LIKE A BEEF JERKY LOGO COMBINED WITH SOMETHING THAT SOULD BE STAMPED ON A BURGER OR MILK JUG. POINTS FOR MAKING THE “V” LOOK SIMILAR TO THE “HOOK ‘EM” HORNS DUE TO THEIR AGRICULTURAL HISTORY.

intimidation FACTOR: RED IS AN ANGRY COLOR. BUT COMPARED TO GRIZZLY BEARS, CANSECO-LEVEL JACKED MECHANICS, AND AN ALMOND IN A BASEBALL CAP, THIS IS JUST MISSING THE MARK FOR US.

GEOGRAPHIC INCLUSION: VISALIA HAS A RICH AGRICULTURAL HISTORY AND RAWHIDE IS A NOD TO BOTH THE OLD SLANG FOR BASEBALLS AND GLOVES (MADE BY COWS/BULLS)

COLOR SCHEME: THE RED AND GOLD ISN’T TERRIBLE. IT’S A DECENT LOOK THAT GIVES US SOME 49ERS VIBES. BUT THAT’S ONE OF THE ONLY THINGS THEY HAVE GOING FOR THEM HERE.

UNRELATED BUT WE LEARNED THAT THE RAWHIDE TEAM ONCE SUFFERED FROM THE GHOST OF AN ALLIGATOR THAT USED TO CURSE THE TEAM. CHECK IT OUT. CRAZY!

UNIQUENESS: THE CRACKS AND THE SHAKING SYMBOLS NEXT TO THE Q ADD NICE TOUCHES, BUT IT’S A “Q”. SOME CREDIT BECAUSE IT’S “QUAKING” BUT… CMON.

intimidation FACTOR: EARTHQUAKES ARE VERY SCARY, BUT NOT SURE ANY OTHER TEAM IS GOING TO BE… “QUAKING” IN THEIR CLEATS. THEIR RECORD THOUGH IS INDEED AN EARTH SHAKER.

GEOGRAPHIC INCLUSION: when you think California WE’d arguably say that one of the top things that comes to mind is, IN FACT, earthquakes. interestingLY enough the Quakes ballpark is actually located near earthquake fault lines so WE think it’s quite fitting.

COLOR SCHEME: HONESTLY, big fan of this one. kinda reminds US of the old St. Louis Rams colors WHICH WERE ALWAYS cool. gives US a good feelingS WITH THE EARTHY TAN AND DODGER BLUE, It works for US.

UNIQUENESS: It’s a nut. With a baseball hat. CAN’T SAY WE’VE EVER SEEN A NUT-NAMED TEAM. You wanna talk about unique? You got it here folks. it’s bold, it’s provocative, it’s…well it’s a Nut with a hat on it.

intimidation FACTOR: IT’S A NUT… WITH A HAT ON IT. A nut that honestly looks like the face of every white dad over the age of 40. THE WORKING-CLASS VERSION OF MR. PEANUT. THOSE WITH NUT ALLERGIES, WATCH OUT.

GEOGRAPHIC INCLUSION: The ModestO/Northern California region is known for its EXPORT of a variety of nuts, so this is just perfect. California produces all of the United States almonds and over half the entire worlds almond supply.

COLOR SCHEME: THIS IS ESSENTIALLY THE SAME AS FRESNO, WITH A SPLASH OF ALMOND COLOR, SO WE CAN’T HATE ON IT.

UNIQUENESS: it’s a set of eyes, WHICH nobody else IN THE LEAGUE really has anything similar so it is indeed unique HERE. WE’VE NEVER REALLY SEEN THIS OUTSIDE OF YOUTH TRAVEL BASEBALL.

intimidation FACTOR: We like what they’re doing here with the whole “eye of the storm” thing for the logo, very clever, nice job. WE personally think this is the most terrifying logo. the idea that this human? or creature? or whatever IT IS, is preying on you is quite frightening.

GEOGRAPHIC INCLUSION: NOT REALLY SURE HOW THEY CAME UP WITH THiS ONE. Lake Elsinore averages like 12 in of rain PER year so THERE’S not many storms happening there. THEIR stadium was built on a flood plain, and they named the team the storm? they could have gone with a swirling tornado looking thing but we guess the EYE of the storm WORKS.

COLOR SCHEME: black and red are a classic baseball color combo, AND IT SEEMS LIKE THE LOW-A WEST TEAMS ARE HUGE FANS OF THAT SCHEME. WE’D SAY TRY TO BE ORIGINAL, BUT THE STORM SEEMED TO TAKE THAT TOO FAR. WE would HAVE NEVER BEEN ABLE TO guess THAT THEIR affiliate is the Padres JUST BASED ON COLOR SCHEME ALONE.

UNIQUENESS: THIS IS A VERY COOL LOGO. the baseball stuck on the anchor is a nice touch, IT’S ALMOST GIVING US LOW-A SOUTHEAST VIBES. AND like THE UNIQUENESS OF Fresno, WE DON’T see another team in THE WEST with an anchor.

intimidation FACTOR: if you’re a baseball, the image of your brethren impaled on that anchor is horrifying. getting hooked by an anchor is probably high on OUR list of things WE never want to experience but it doesn’t have that same scare FOR A HUMAN when it’s SHOWN AS a pierced baseball. ALTHOUGH ANCHORS ARE SUPPOSED TO STOP YOU AND HOLD YOU DOWN, THIS LOGO ALSO JUST LOOKS ATHLETIC, FAST, AND POWERFUL.

GEOGRAPHIC INCLUSION: Stockton, CALIFORNIA is the only inland port IN THE CITY so the team wears the logo with pride as a tip of the cap to the cities history.

COLOR SCHEME: don’t think you can go wrong with the blue and grey color scheme. classic, clean, it just works. might HAVE TO order a lid or t-shirt.

UNIQUENESS: we have other human based logo HERE, but this one has arms and legs AND LOOKS like a mechanic! how many other logos can fix your car if you’re in a jam? “If you can swing a wrench, you can swing a piece of lumber” (s/o Patches O’Houlihan)

intimidation FACTOR: Fresno, you have competition. This guy looks like a long lost bash brother. Or is that Dan Ugla with his massive forearms? He’s not even swinging a bat – he’s got a giant wrench. He didn’t come here to just hit dingers. he’s coming for your whole dugout.

GEOGRAPHIC INCLUSION: Get your kicks on Route 66. the logo and current team name are nods to the famous Route 66 that ran through Saint Bernardino where the team plays.

Bonus point for having a taco Tuesday and waggin Wednesdays at the park.

UNIQUENESS: We’re not sure if this speaks to more of the uniqueness of the league itself or the grizzlies, but to be the only animal logo here speaks volumes. TheY even had the brains to go with a full-grown grizzly, unlike whoever dropped the ball in chicago.

intimidation FACTOR: are you kidding me? We’re talking top 5 fiercest animal in the world. We all saw what that bear did to dicaprio In The revenant, straight-up mauled him. Do you have an oscar? Did you star in titanic? Didn’t think so. don’t. Poke. The bear.

GEOGRAPHIC INCLUSION: Grizzlies used to be native to the california region, but are now more presently located in western canada and the california state flag. Extra point for fresno being where the last california grizzly was shot & killed. Rip.

COLOR SCHEME: The brown grizzly surrounded in an aura of red rage with the shiny white claws, this logo is the best in the west. We’re moist.

Stay tuned for next week. Got some new content involving the logos you see here and from the past 👀

View all posts by Sean